About two hours from Delhi is the ceramic city of Khurja – famous for its colorful vessels, glass and ceramic works. A quick walk from Delhi, Khurja offers eyesight to the sore eyes, a pleasant relief as it welcomes you to its colorful sub-lanes and streets. Nestled in the middle of a lush mango orchard, the city is a paradise for pottery lovers and art connoisseurs. With Fresh sugarcane juiceThe vine (wooden apple) sorbet, and the spice sikanji (lemonade) that vendors and farmers sell in the summer, experience a kind of old rurality away from the general chaos of urban areas – a kind of mental cleansing required from time to time.

And, Khurja One welcomes in all its glory. Colorful, warm, autumn colors, earthenware, spots on the streets, fragrances of freshly baked and shiny earthenware – the timeless art of ‘earthenware’ from ancient civilizations is not surprising. India has a rich tradition of living craftsmanship and boasts a wide variety of earthenware vessels – longi vessels from Manipur, black vessels from Central Indian plains, blue vessels from Rajasthan, Khawda from Gujarat, terracotta from West Bengal, and Khurja from Uttar Pradesh. .

The city has many factories and contributes to craft-based livelihoods and employment. The Ceramic pottery work Khurja of Bulandshahr district has also been recognized by the Government of India in Uttar Pradesh under ‘One District, One Product Scheme’. The city contributes strongly to the Government of India’s ‘Vocal for Local’ and ‘Make in India’ objectives, promotes small scale industries, and supports a myriad of artisans and craftsmen. People from villages near Nehrupur in Bulandshahr also find employment here. According to the CSIR-Central Glass and Ceramic Research Institute, Khurja has more than 494 units for small industries. Craft Farm also enjoys Geographical Indication (GI).

According to local and secondary literature, Khurja is an art The dishes Dated about 400 years ago. There are many historical and historical stories. For example, some believe that the potters of Multan came to Khurja, settled here, and began to practice pottery – which gives the city its uniqueness in creating a commercial heritage. In the 1940s, ceramic and pottery works received government encouragement, and since 1950, craft-based livelihood promotion efforts have received more institutional support. 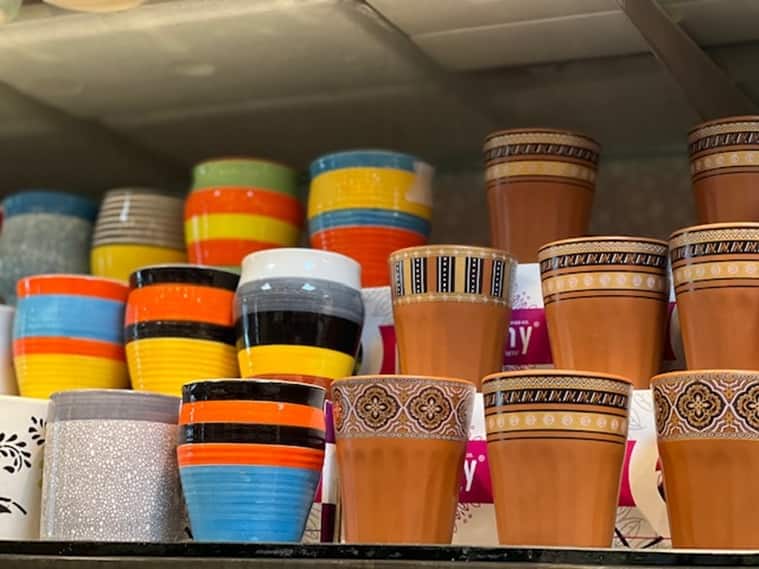 Special kind of khurja pot ‘safedmitti, ‘Some locals call it. Known colloquially as gold clay, the material for this unique clay mixture is procured from Gujarat and Rajasthan and other parts of India. The process is detailed and meticulous. A unique blend is made on ball-wheels, such as 60-65 percent clay, other clays and minerals. Quartz, China clay, palace clay, and 30-40 percent crushed stone – which adds more durability and strength to the resulting texture. Measured in ‘gatti‘Which weighs 25 kg – about 300-350 gattis Is purchased. About 30,000 to 35,000 rupees is spent on transportation from
Bikaner in Rajasthan and other cities up to Khurja. Once this mixture is formed, it is filtered, and a paste or flour is obtained. This paste is then poured into electric molds to obtain the desired shapes – called ‘names’.dhaalnaOr pour the paste into your favorite shapes. Craftsmen also make handicraft selection products; However, most of the wholesale production for complete sales is done with the help of electric molding machines.

Next, the products are left to dry, and the process of ‘smoothing’ or ‘.Puchai‘Follows. It is nothing more than treating these crafts first with sandpaper and then with water. Sponges soaked in water are used to soften and polish these products, and women are mainly involved in this activity. Sarada, from Badaun, 50, for example, has been working in the Khurja ceramics and pottery industry for some 15 years. Like other women, sheClothes – Smooth and finishing Artworks – Other processes such as mugs, cups, and gift wrapping. She stays in the factory for about twelve hours every day and earns 5000-6000 rupees monthly. Once the products have dried, artisans and craftsmen create the initial floral borders and designs using butter paper, sponges and plain paints. The other always pursues patience and diligence Painting, Then glazing and finally baking. Artists involved in color and painting have been practicing here for decades and their delicate handicrafts or ‘Art‘As they call it. Color and design have evolved. According to locals, initially, artisans used warm colors of earthy green, red and other autumn colors in a wide floral pattern. Universally, however, black is used to paint floral designs and borders. The works usually have delicate floral borders and shapes, usually a ‘three-tulip floral pattern’ and popular Art to the Mughals -Oir is constantly flowing in red, beige-white, sea-green and yellow. Kitchen utensils and plants designed to ‘mogul’ are very expensive, as it involves delicate handwork from end to end.

Product diversification is imperative, and in large factories, a dedicated team of researchers studies changing demand in India and abroad. For example, microwaveable kitchenware from Khurja is now being exported to other countries, and a wide range of products directly from factories are available in markets such as Amazon. With the introduction of electric wheels and electric kilns, the advent of television and cable TV in the 1990s, and modern advances in technology such as social media, how pottery has evolved as an art form has made a significant contribution. Commerce, over the years. For example, Rajiv Goyal, 37, owner of the Somni factory in Khurja, employs about 150 workers. Like other factory owners and entrepreneurs here, he left his former business and entered the ceramic industry, realizing the profit and popularity of pottery crafts in the early 1990’s. Similarly, Shyamlal, 55, and his family had earlier grown wheat and maize in their fields. They started selling pottery in the mid-1990s mainly for income diversification. Most of the families here became involved in the art and production of pottery in the mid-1990’s, realizing the popularity and profitability of the craft.

With more than 500 products in each factory, Khurja is the most accessible and affordable rental market near Delhi, where consumers and buyers can purchase products directly from artisans, thus promoting local employment, contributing to livelihoods and preserving traditional arts and crafts. Nurture the country, and the cultural capital of the country. Khurja pottery works also make more affordable alternatives than Rajasthan’s expensive ‘blue pottery’ art.

During the field interaction, many potters and artisans demanded more subsidies on oil and gas, as baking is mainly dependent on gas and diesel. During the Covid-19-inspired lockout and the resulting exodus, Khurja also faced a crisis like other handicraft-producing cities. Khurja, like other handicraft industries, had a lot of goods. However, once the lumberjacks began to loosen, most products began to sell around Diwali – in general, the demand for khurja products was high at that time. Much more can be done to develop Khurja as a vibrant tourist destination. Due to its artistic character and the riot of colors the city offers, sustainable tourism hubs can be promoted. Livelihoods and revenue can be increased by bringing cottages, hotels and restaurants that promote heritage food, clay workshops, clay safaris, training and capacity building programs for artisans and painters, and exhibitions of Khurja’s history all under one roof.

Public-private community partnership models can be used to engage corporate houses, district administrations, and civil society with local communities in their sustainability initiatives.