The first case of polio in the U.S. in nearly a decade has been found in upstate New York, health chiefs revealed Thursday.

The patient — whose name has not been released — was diagnosed in Rockland County after visiting doctors when they became unwell.

Health officials said the person is believed to have been infected outside the United States, but did not say where.

They did not disclose their age, gender, travel history, vaccination status or symptoms they experienced.

This is the first case of polio in the United States since 2013.

Children in the United States are routinely given the polio vaccine to protect them from the debilitating disease that causes paralysis in about one in 100. About one in ten people with paralysis die from the disease.

But in recent years, the resistance level of the population has fallen below the threshold recommended by the WHO to prevent outbreaks in the country. 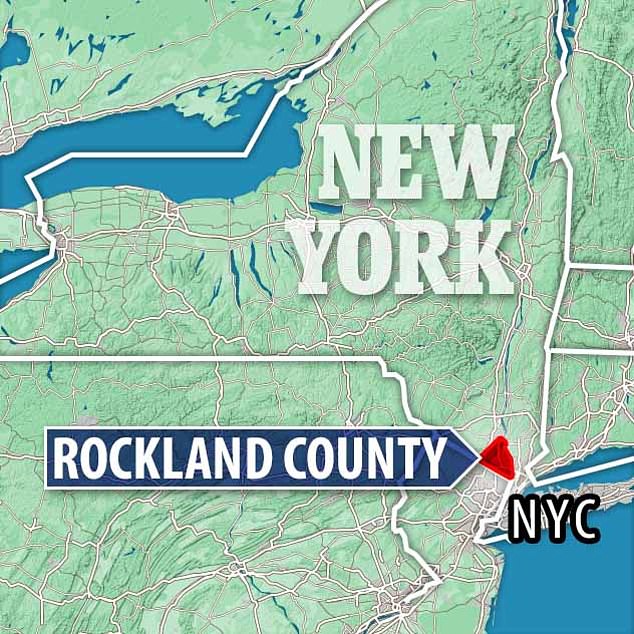 The case was discovered in Rockland County in upstate New York. Officials believe the patient was infected overseas

Announcing the case today, the New York Department of Health asked health care providers to be on the lookout for additional cases.

They urged anyone who hasn’t been vaccinated against the disease or hasn’t completed the vaccination course to get the jabs, as those people are at risk of serious illness.

Health Commissioner Dr Mary Bassett said: ‘Based on this case and what we know about polio, the Department of Health recommends that unvaccinated people be vaccinated or boosted with the FDA-approved IPV polio vaccine as soon as possible.

Polio: Once the most feared disease in America

Polio is a serious viral infection that was once common around the world.

The virus remains in the throat and intestines for up to six weeks, with patients being most contagious seven to 10 days before and after the onset of symptoms.

But it can spread to the spine causing muscle weakness and paralysis.

The virus is more common in infants and young children and occurs in conditions of poor sanitation.

How deadly is it?

Most people have no symptoms of the infection, but about one in 20 have common symptoms such as fever, muscle weakness, headache, nausea and vomiting.

About one in 50 patients develops severe muscle pain and stiffness in the neck and back.

Less than 1 percent of polio cases result in paralysis, and one in 10 of these results in death.

Among those who develop symptoms, these appear three to 21 days after infection and include:

How does it spread?

People can get polio through airborne droplets when someone coughs or sneezes, or comes into contact with the feces of an infected person.

Are there different types?

There are three types of ‘wild’ polio, which have been largely eradicated in Europe, the Americas, Southeast Asia and the Western Pacific.

Types 2 and 3 have been eliminated due to global vaccination campaigns, with the last cases found in 1999 and 2012, respectively.

The remaining, type 1, wild polio exists only in two countries, Afghanistan and Pakistan.

Wild polio has been eradicated in almost all countries of the world thanks to vaccination.

But the global rollout has spawned new strains known as vaccine-derived polioviruses.

These are strains that were originally used in live vaccines but spread in the community and evolved to behave like the wild version.

Is polio still in America?

The last case of person-to-person transmission in the US occurred in 1979, which is also believed to be the last wild polio case.

But since then there have been dozens of cases of vaccine-acquired poliovirus, although they have been one-offs, with no further transmission.

Have I been vaccinated against polio?

Inactivated polio vaccine (IPV) has been offered to Americans since 2000.

It is given as four doses, the first at two months of age. It is also administered at four, six to 18 months, and four to six years of age.

Uptake has declined slightly but remains above 90 percent nationally.

There are concerns that vaccine hesitancy has increased during the Covid crisis due to the spread of misinformation about jabs and school closures for that virus.

‘Polio vaccine is safe and effective, protects against potentially debilitating disease, and has become part of the backbone of required, routine childhood immunizations recommended by health officials and public health agencies nationwide.’

Testing revealed that the patient had been infected with a strain of polio from someone who had received the oral polio vaccine (OPV). It hasn’t been used in the U.S. since 2000, when health officials suggested they were infected outside the country.

OPV is still used in a handful of countries — including Pakistan and Afghanistan where the virus is still prevalent — because it can trigger immunity more quickly.

But in rare cases, the virus used in this jab can mutate to resemble the wild or naturally occurring type.

The inactivated poliovirus (IPV) currently used in the United States has no risk.

Polio is a potentially disabling and life-threatening disease, which in severe cases can cause paralysis that spreads down the spine and even death.

It is highly contagious and is spread when someone touches a contaminated surface with the feces of an infected person and then with their own mouth.

About one in four people who catch the virus develop flu-like symptoms such as a sore throat, fever, fatigue and stomach aches.

One in 25 will suffer from meningitis – when the spinal cord becomes infected – and later be paralyzed. Out of which one in 10 people die from infection.

Urging people to get vaccinated, Rockland County Executive Ed Day, 72, said: ‘Many of you may not remember polio, but when I was growing up, the disease struck fear into families, including my own.

‘Decades after the vaccine was made, the fact shows how relentless it is.

‘Do the right dose for your child and do your community a big favor and vaccinate your child now.’

Health chiefs said a vaccination clinic in Pomona, Rockland County, will be open tomorrow from 10 a.m. to noon and Monday from 1 p.m. to 4 p.m.

The case came to the United States after Britain also reported its first virus infection in nearly 40 years last month.

Experts say it can be found in single houses and streets.

The country’s health chiefs believe polio probably came from travelers from Pakistan, Afghanistan or Nigeria, who shed the virus in their feces after receiving the live oral vaccine, which is used in some countries with current outbreaks because of its rapid effect.

It is not clear if this is also the case in the US.

Polio was once the most feared disease in America, causing panic throughout the 1940s.

Parents were afraid to let their children play outside — especially in the summer when the virus seems to be more common — and public health officials would quarantine homes and even entire cities where it was spotted.

This was followed by more than 15,000 strokes each year, and hundreds of deaths.

But in the mid-1950s the country began rolling out poliovirus vaccines to prevent the disease.

By 1979, the United States declared the virus eradicated. There have been no known transmissions on US soil since then.

Even as the vaccine was rolled out globally, the virus was pushed back in some countries.

It is now known to have spread only to Pakistan and Afghanistan. The WHO has warned that as long as it continues to spread there, it remains a threat to the world.

But in recent years — as the virus has receded from the national memory — vaccination rates in the United States have slowed.

The latest statistics show that about 92.6 percent of Americans have been vaccinated against polio by their second birthday.

This is below the 95 percent threshold WHO says is needed to prevent an outbreak.

The Centers for Disease Control and Prevention (CDC) recommends that all children receive the polio vaccine.

It is given as four shots in the leg or arm, the first at two months of age, the second at four months, the third between six and 18 months and the final dose between four and six years.

The vaccine is highly effective, with 99 percent of children receiving lifelong protection against the disease.