Tory leadership debate host Kate McCann said she was feeling ‘a bit embarrassed’ and ‘a bit hurt’ after returning this evening after fainting last night in front of a shocked Liz Truss and Rishi Sunak.

Ms McCann presented The News Desk this evening, filling in as planned for regular presenter Tom Newton on Dawn, who joked ‘after all the excitement from the leaders’ debate last night, thank God I’m sitting down’.

He began by joking again: ‘There was a lot of speculation about whether someone would be the victim of a knockout blow in last night’s showdown on The Sun, nobody predicted it would be a good presenter.’

The show began with a recap of key points from last night’s short debate between the two Conservative candidates.

The Sun’s deputy political editor Kate Ferguson, a guest on tonight’s show, said: ‘I think there’s a lot to get into in last night’s debate but before we do, I wonder how you’re feeling today?’

McCann said: ‘A bit embarrassed with a bit of injury but happy to be back and fully recovered. I don’t think it’s necessarily what any of us expected.

‘It was one of those moments that nobody can really prepare for.’

He added that he thought both candidates were shocked and agreed to rematch at a later date.

Host Kate McCann said she felt ‘a bit embarrassed’ after returning after fainting during the Conservative leadership debate last night.

Kate McCann announced the news on Twitter, prompting fellow talkTV host Piers Morgan to joke: ‘You didn’t dent my studio floor, did you?’ 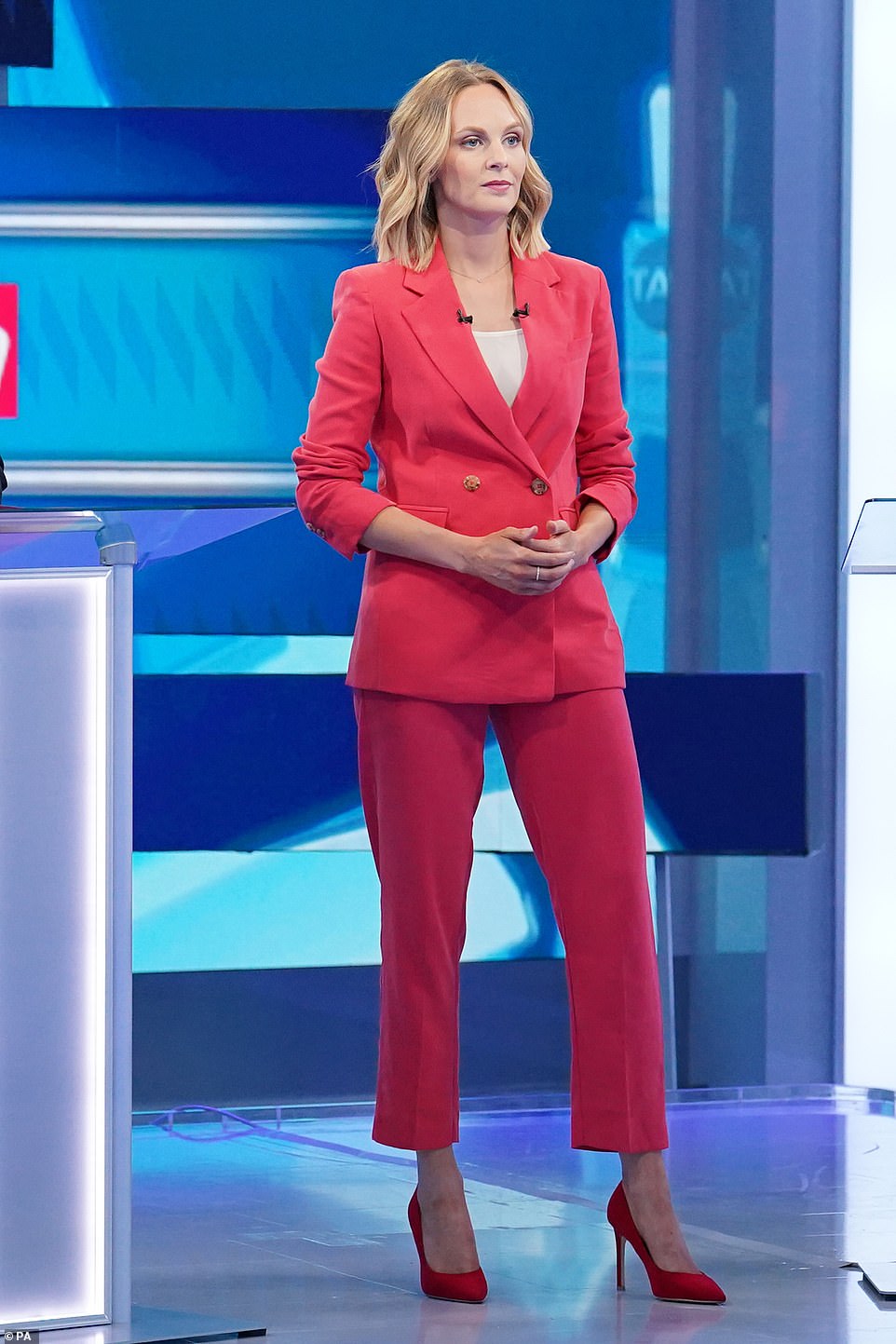 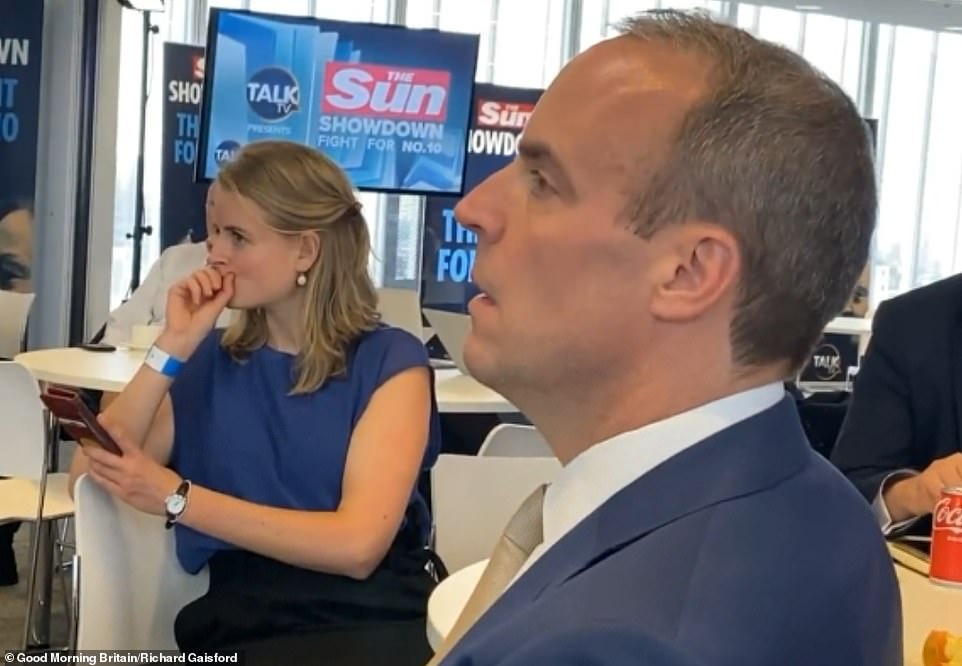 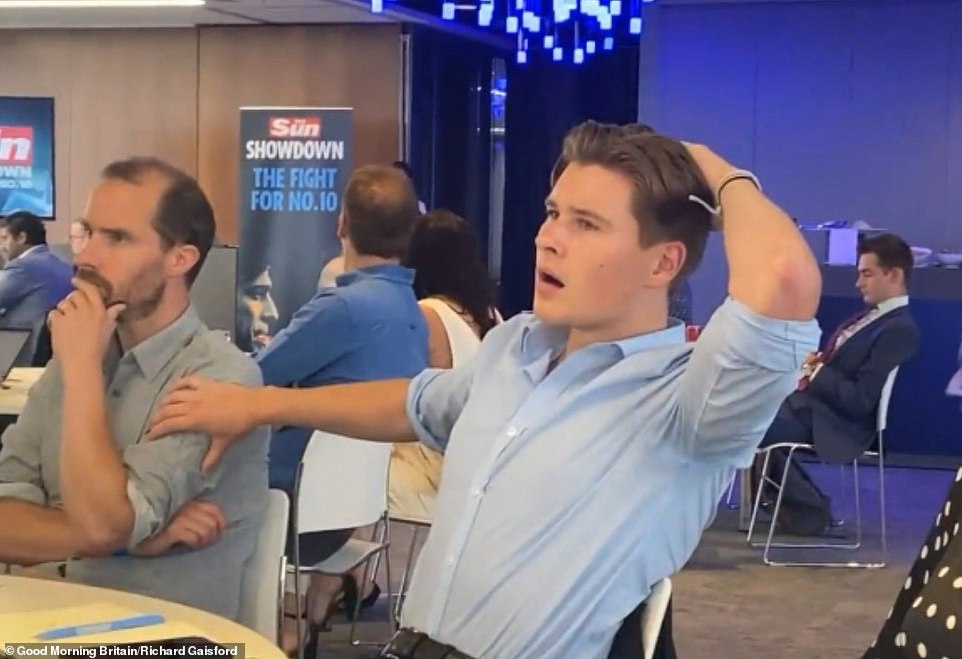 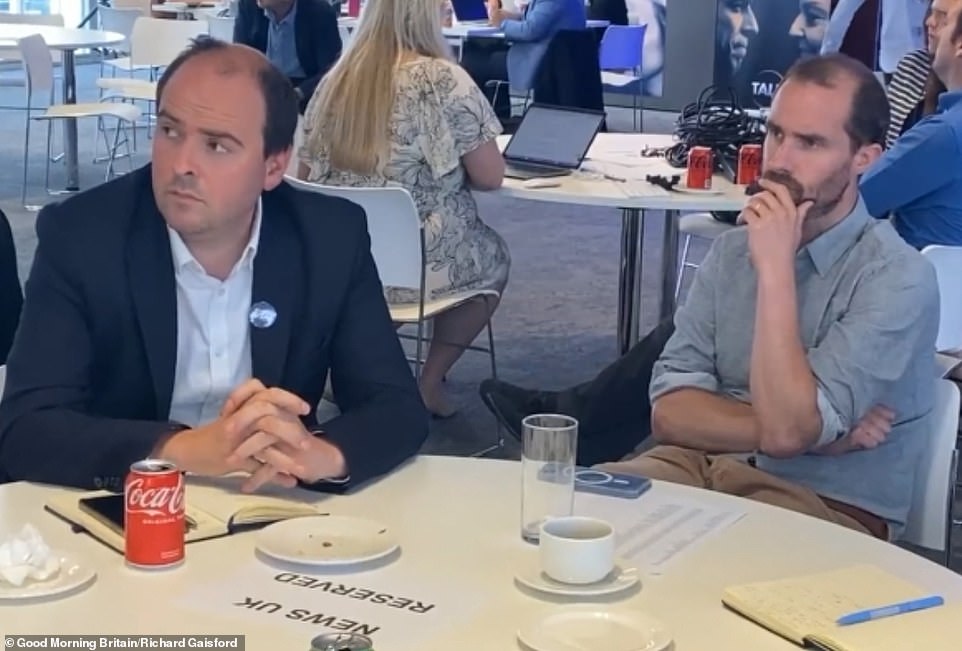 There is about 20 seconds of silence in the room – which is reserved for reporters to quiz the debaters and their supporters.

Revealing the news he will be hosting, the journalist first tweeted: ‘Well last night wasn’t meant to end this way! Thanks everyone for the lovely messages ❤️- I’m fine now- and apologies to @trussliz and @RishiSunak for cutting the debate short. Tonight I’ll be unpicking the debate from 7pm with some new polls (…yeah, sit down!)’

Reacting to her announcement, fellow TalkTV host Piers Morgan joked: ‘You didn’t scratch my studio floor, did you?’

Today it emerged that the channel is questioning why there was no ‘plan B’ to keep the debate on air – other presenters to step in and take Ms McCann’s place.

‘There was already so much experienced on-screen talent that they could take it on – they could wing it,’ a source told Eye.

‘All the News UK bigwigs were there. There was a panicked pow-wow. Some said, “Who can we fill?” But they decided against it.’

A video emerged of the reaction to the incident in the ‘Spin Room’, with onlookers including Deputy Prime Minister Dominic Raab watching silently on screen. A man is seen hanging over his head with one hand and holding the person next to him with the other.

Ms Truss was answering a question about half an hour into the TalkTV/The Sun program when Ms McCann fainted.

The foreign secretary, clearly alarmed by the loud noise, clutched her face in shock and said: ‘Oh my God!’ Ms Truss was then seen leaving her podium and walking towards where Ms McCann was standing. Sunak also went to hold her hand.

There was a long pause in the broadcast while viewers wondered what had happened in the studio, before a ‘medical problem’ was cited as the reason for the disturbance and the rest of the show was cancelled.

Ms McCann, who left her role as a political correspondent at Sky News to join TalkTV as political editor in January, is a hugely popular figure among Westminster journalists, and is considered a ‘rising star’ in her industry.

The presenter, who is in her thirties, graduated in politics from Newcastle University in 2009, and joined the Guardian after a short stint as a parliamentary researcher.

Among her other accomplishments, Ms. McCann was President of the Press Gallery in 2018. She was only the second woman to win the title in more than 200 years.

Speaking to the Press Gazette about her move to TalkTV earlier this year, Ms McCann said she was excited the network was able to ‘tear up all the rules and start again’.

She added that her family’s motto, which seemed appropriate for the new venture, is: ‘Dare to be different.’

He added that she is ‘one of the brightest rising stars in the lobby’.

Kate was highly praised at the Press Awards in 2017 for receiving a copy of the Labor manifesto – the first time a party’s manifesto had been leaked in its entirety to a newspaper.

Piers Morgan wrote: ‘I’ve seen some terrible ways to make yourself the biggest star on @TalkTV but this is ridiculous @KateEMcCann – seriously, you’re fine.

‘You were brilliant until this happened, and will be brilliant again.’ 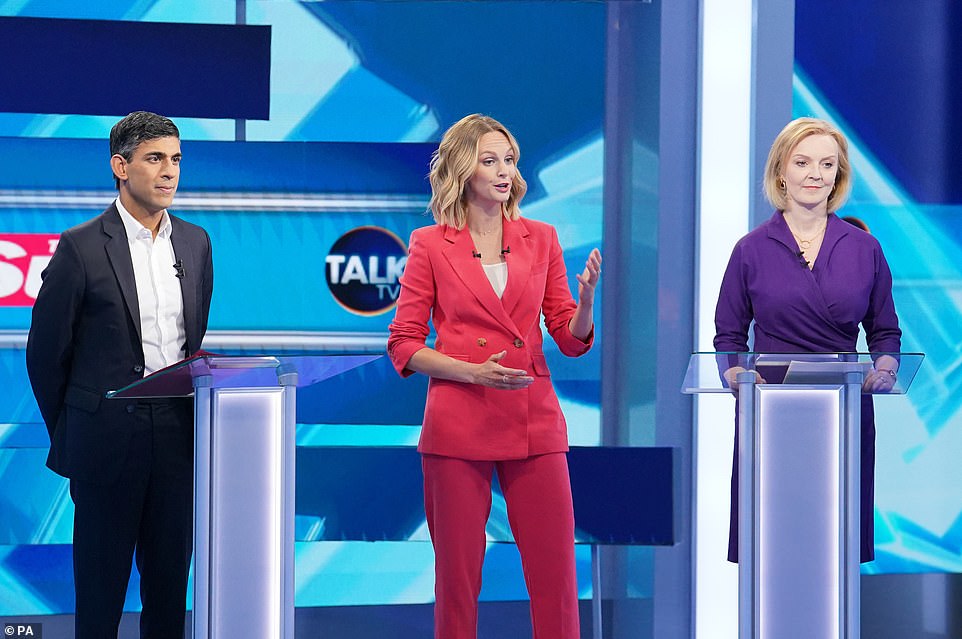 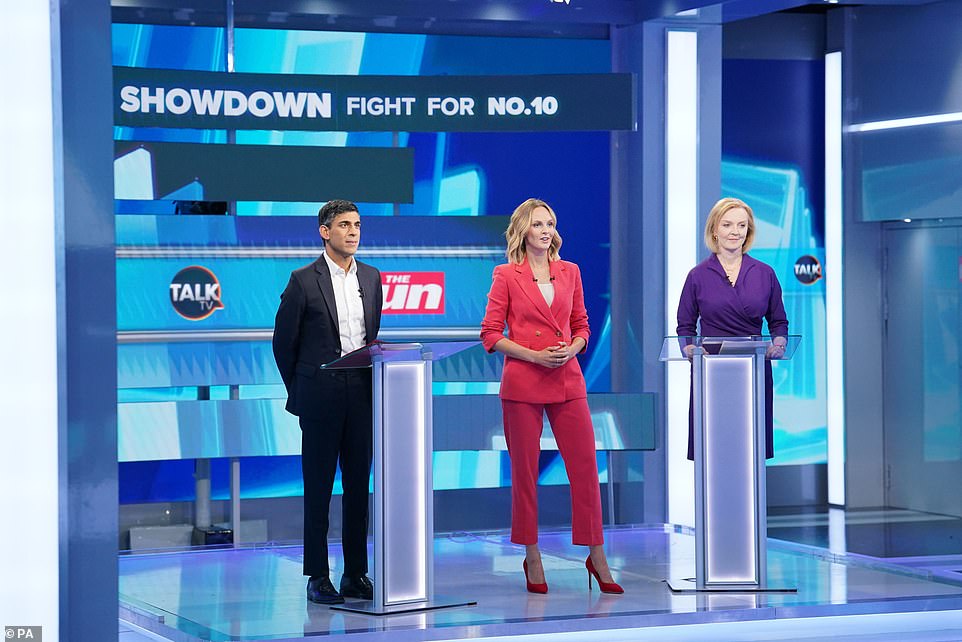 Mr Sunak, Ms Truss and Ms McCann yesterday before the start of the showdown at Ealing Studios, West London 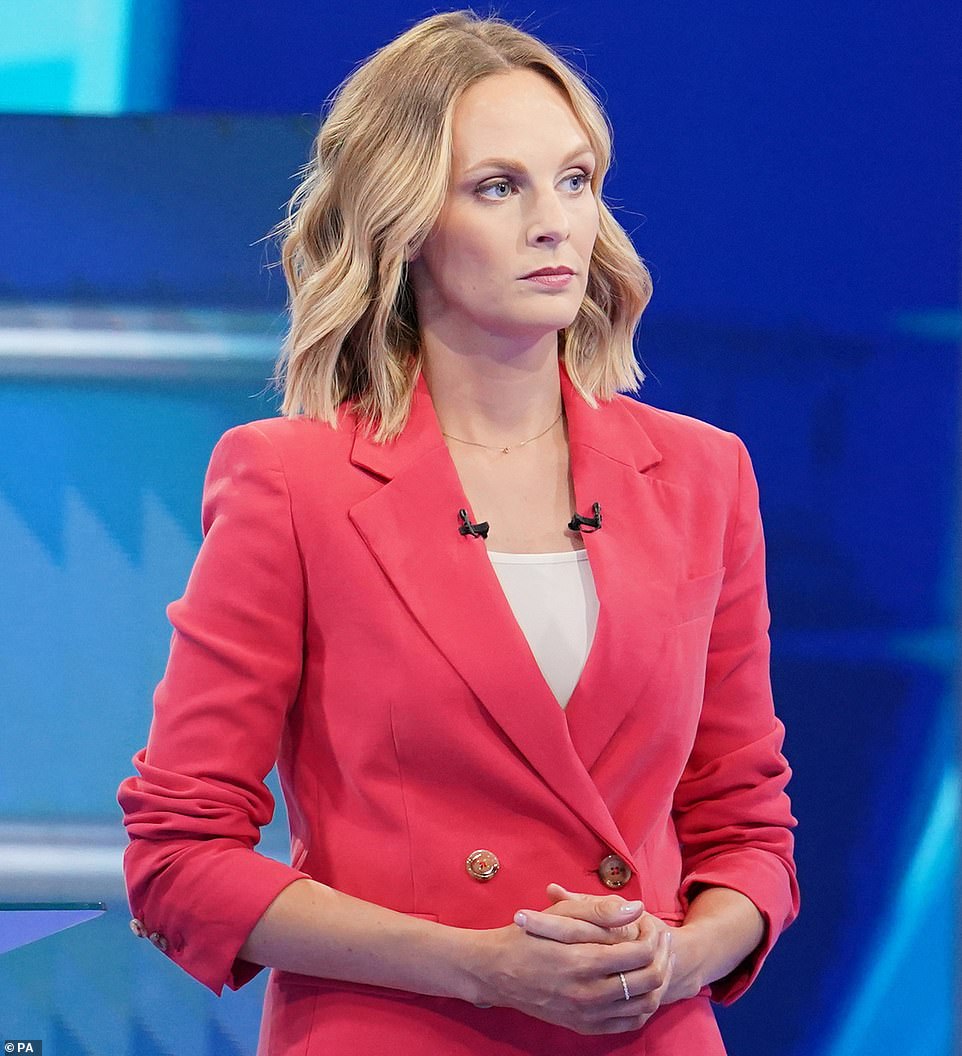 Kate McCann is a hugely popular figure among Westminster journalists, and is considered a ‘rising star’ in her industry.

Fellow TalkTV host Tom Newton Dunn said: ‘I know every night working with @KateEMcCann that she is one of the best in the business of holding politicians to account.

‘She proved it in the first half hour of the debate, and will prove it again. She is an amazing talent and I am very proud of her.’

And Sky News presenter Kay Burley added: ‘@KateEMcCann was doing a sensational job. So relieved to hear that she was okay. I am sure the candidates will return to continue the debate under her expert stewardship. Rest in peace Kate X.’

Ms McCann had a dramatic moment tonight when Ms Truss answered a question on the TalkTV/The Sun show about half an hour in.

The foreign secretary, clearly alarmed by the loud noise, clutched her face in shock and said: ‘Oh my God!’ Ms Truss was then seen walking towards where Ms McCann was standing, while Mr Sunak went to hold her hand. 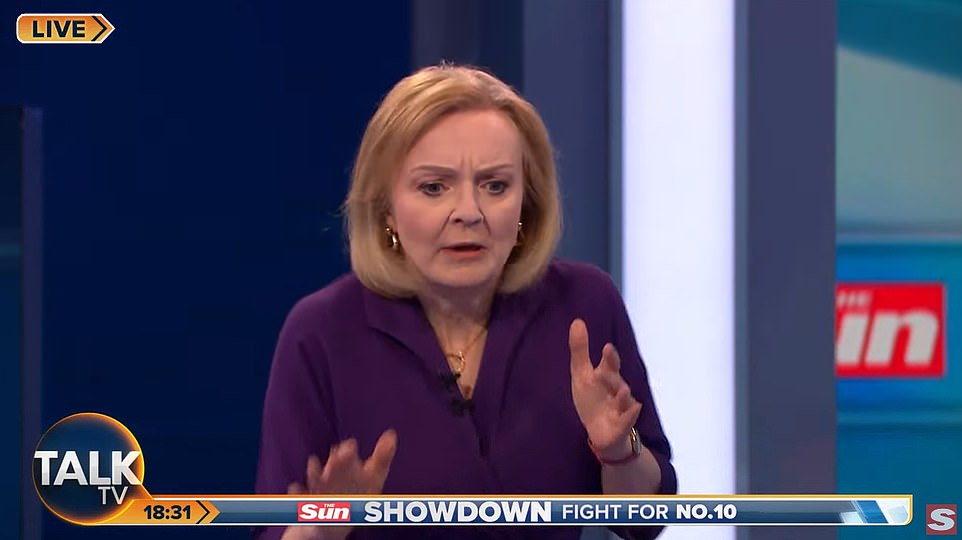 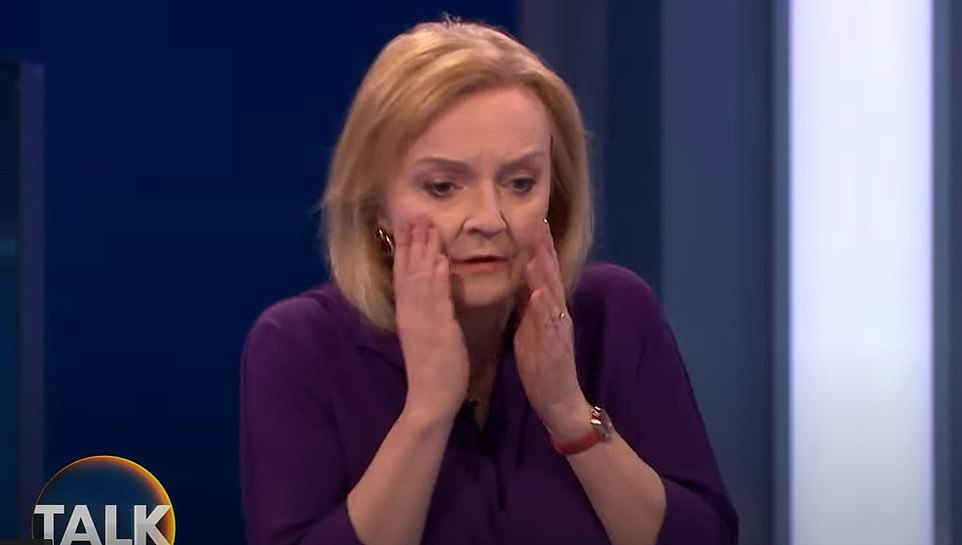 The foreign secretary clutched her face in shock at the loud noise and said: ‘Oh my God!’

There was a long pause later in the broadcast while viewers wondered what had happened in the studio, before a ‘medical problem’ was cited as the reason for the disturbance.

Confirming that the rest of the debate would not go ahead, TalkTV later said in a statement: ‘Kate McCann fainted on air tonight and although she is fine, medical advice was that we should not continue with the debate. We apologize to our viewers and listeners.’

Both Tory leadership candidates raised the prospect of resuming their debate on TalkTV at a later date.

Posting to Ms McCann on Twitter, Mr Sunak wrote: ‘Great news you are already on the mend. It was a great debate and I look forward to being grilled by you again soon!’

Ms Truss tweeted: ‘Relieved to hear @KateEMcCann is ok. Really sorry to have to end such a good debate. Look forward to meeting Kate and the rest of @TheSun @TalkTV team again soon.’ 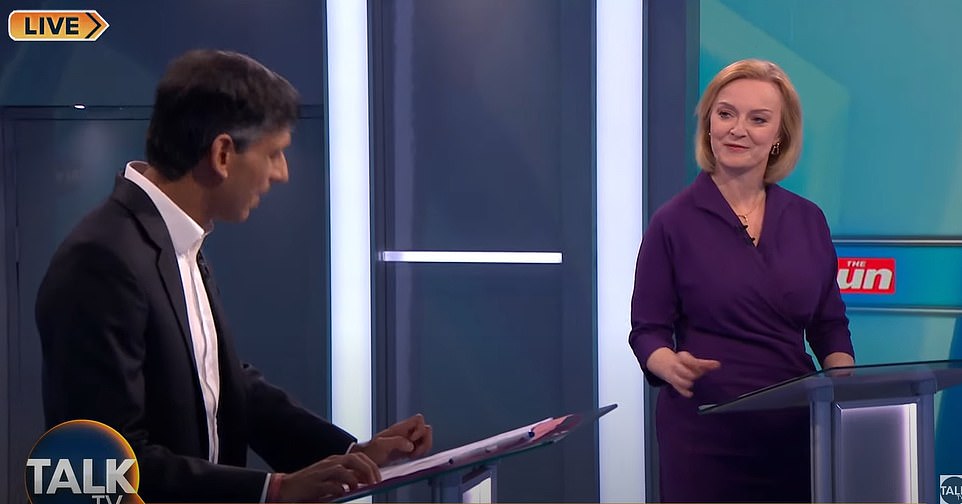 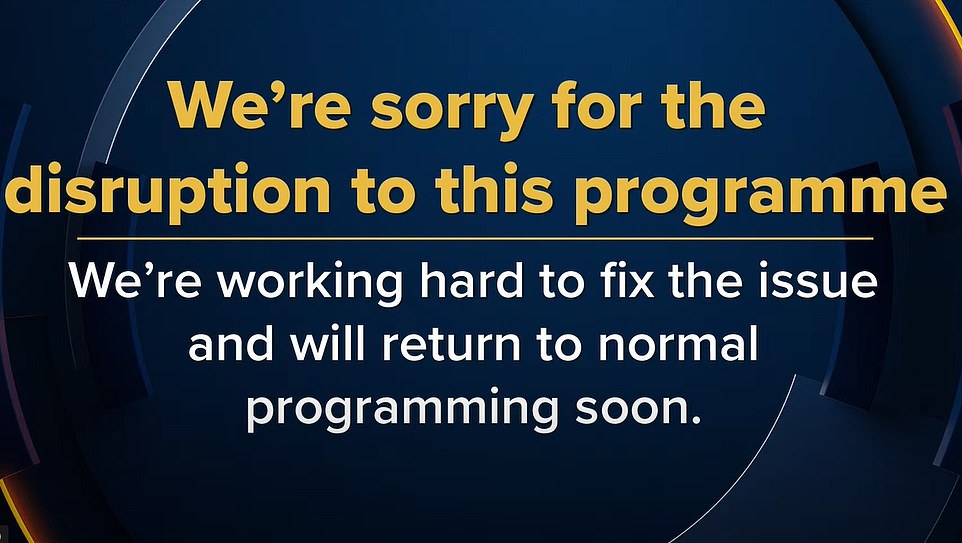