At a press conference on Thursday, Kremlin spokesman Dmitry Peskov said Secretary of State Anthony Blinken had jumped the gun to announce a prisoner swap between Russia and the United States.

“We know that such issues are discussed without the release of any notice,” he said, adding that Blinken’s statement was clearly a deal.

‘Usually, the public learns about contracts after they have been implemented.’

Peskov stressed that ‘no deal has been finalised’ and would not provide further information. 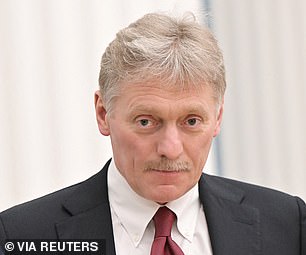 Kremlin spokesman Dmitry Peskov pumped the brakes on the prisoner exchange for the release of WNBA star Brittany Griner. 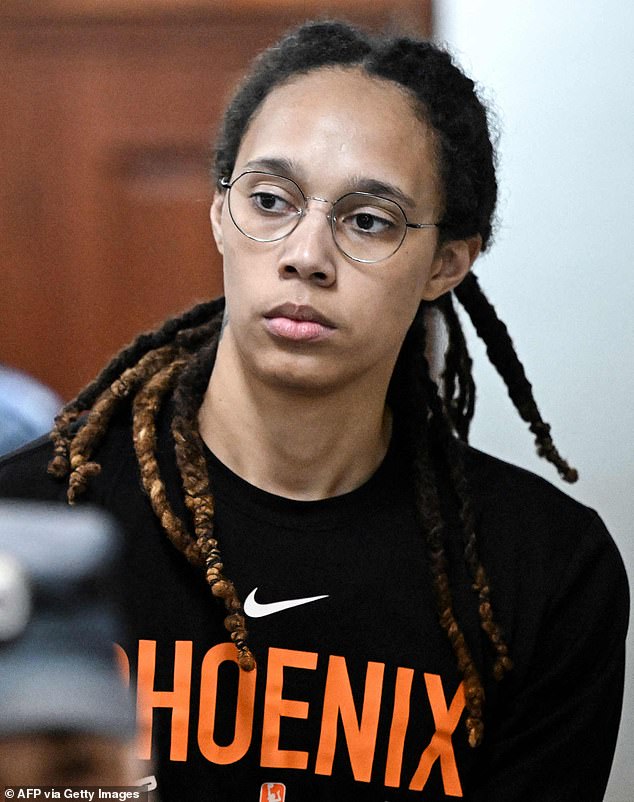 WNBA star Brittany Griner arrives at a hearing in Moscow on July 27. In court, she said she ignored a United States travel advisory and went to Russia in February because she didn’t want to disappoint her team.

Peskov’s cool response to Blinken does not mean the deal is dead.

Russian Foreign Ministry spokeswoman Maria Zakharova told The Associated Press that talks between Russia and the United States are ongoing, but “no concrete results have been reached yet.”

“During the negotiations, we will move forward keeping in mind the interests of both parties,” she said.

Rebecca Koffler, a Russian-born former US intelligence official, told Fox News that talks outside the White House had created a ‘counterproductive narrative’ that could kill the deal.

“It’s hard to predict the exact outcome of these talks right now because, on the one hand, the Russians want Viktor Bout back, because he’s a former military intelligence officer with possible indirect ties to Putin,” she said.

‘On the other hand, with the counterproductive narrative coming out of Washington – Putin as a war criminal (even if he deserves it), the Senate approved a resolution yesterday, which aims to designate Russia as a ‘sponsor of terrorism’ – and the overall crisis in US-Russia relations, Russia It is naive to expect Washington to play ball with them.’

Peskov made a cryptic reference to the rhetoric coming out of the West Wing.

“When discussing such matters, information should not be attacked,” he said.

Russia may delay the talks to get something more out of the exchange.

Blinken has asked for a phone call with Russian Foreign Minister Sergei Lavrov, but has not yet done so.

“Putin knows that President Biden is under pressure to bring these Americans home, amid rapidly declining domestic popularity — he will almost certainly try to squeeze concessions from the Biden administration. Putin is in no rush to accept Washington’s offer,” Koffler told Fox.

Earlier this week, Griner told a Moscow court that she had ignored travel advice not to travel to Russia in February because she did not want to disappoint her Russian teammates.

‘There was a substantial offer on the table a few weeks ago to facilitate their release. Our governments have communicated repeatedly and directly on that proposal,’ Blinken told reporters, ‘and I will use this conversation to personally follow up and I hope that will lead us to a solution.’ 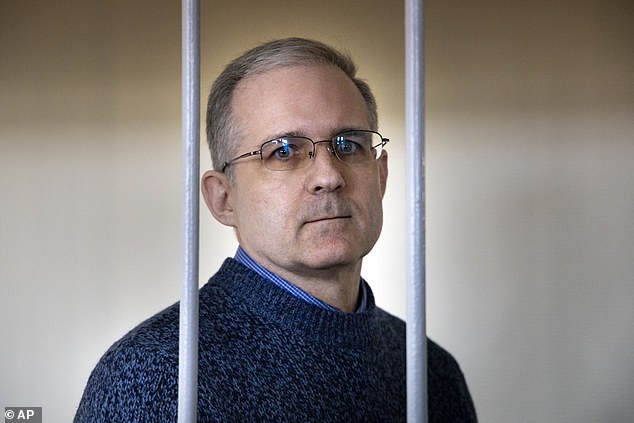 Griner, an American citizen who has played for the Russian basketball team in the NBA off-season since 2015, was arrested at a Moscow airport on February 17 with a vape containing cannabis oil in her bag.

Cannabis is illegal in Russia, with no exception for medical treatment.

Speaking in a Russian court on Wednesday, Griner explained why she flew to Russia despite a US-issued travel advisory in the build-up to the attack on Ukraine – which began six days after her arrest.

She has previously pleaded guilty to drug charges, with an ongoing trial now set to decide what sentence she should serve.

‘This is the most important part of the season, after the break. It’s the playoffs. “The whole season I worked, my team worked hard to get in a good position,” Griner said, “There was nothing that would change that for me.” I don’t want to let my team down.’

‘I was aware of the ‘do not fly’ advisory, but as I said, there was nothing to change my mind about coming back and doing my duty for my team,’ she continued. 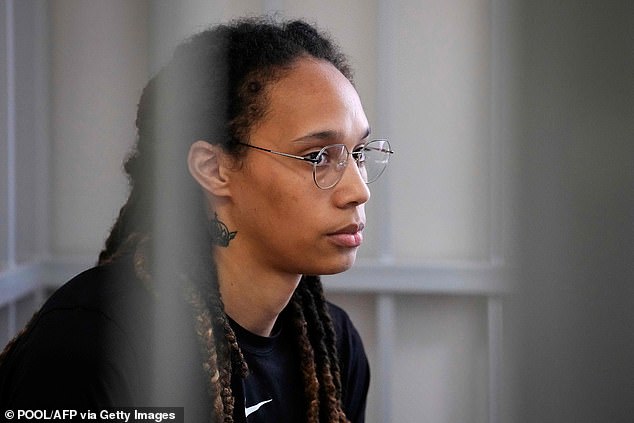 Speaking in a Russian court on Wednesday, Griner explained why she flew to Russia despite a US-issued travel advisory in the build-up to the attack on Ukraine – which began six days after her arrest. 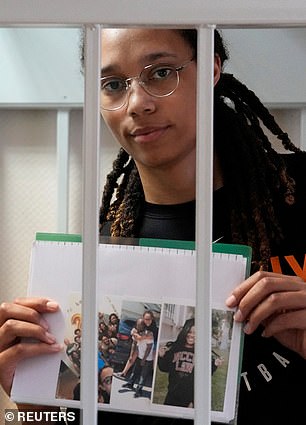 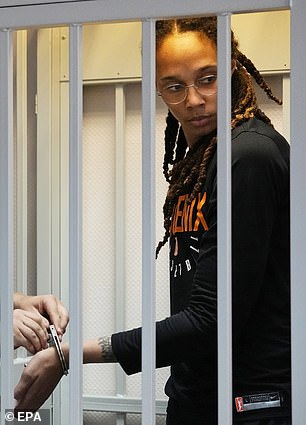 Griner, a US citizen who has played for the Russian basketball team in the NBA off-season since 2015, was arrested at a Moscow airport on February 17 when a vape containing cannabis oil was found in her bag.

Griner also explained why she had marijuana, saying she used it as a side-effect-free way to rest from years of sports-injuries.

“I’ve had injuries throughout my long basketball career. From my spine, I have no cartilage in my knees. I was in a wheelchair for four months. I broke my leg and my knee was really bad. So I was confined to a wheelchair,’ she testified.

She said that she accidentally left the vape in her bag while rushing to pack.

‘I recovered from covid, the stress of packing, making sure I had my covid tests. Ship structure. And I was in a hurry, throwing my stuff into my bag.’

News of the proposal comes as the Biden administration faces mounting pressure from the Griners’ and Whelan’s families amid fears that Russia will use Americans as leverage to ease sanctions imposed over its brutal invasion of Ukraine.

“If we’re talking to all of you publicly, it’s not going to help us get them home,” Kirby told reporters after announcing the offer to release Bout in exchange for Griner and Whalen.

Nor did he respond directly when asked if Russia had responded directly to the proposal.

‘I don’t want to go into the details of the negotiations,’ Kirby said.

Bout, known as the Merchant of Death and the inspiration for Nicolas Cage’s character in the 2005 film Lord of War, is in prison on charges of arms smuggling.

Griner’s trial began on July 1, and she pleaded guilty on July 7 to drug charges while she had no criminal intent.

‘I wish to plead guilty, your honor. But there was no intention. I don’t want to break the law,’ she said in her petition.

His defense team is hoping for a lenient sentence, though he could face years in prison.

Whelan’s family has been lobbying top authorities to secure his release for years. The pressure only increased after the administration was able to secure the release of another Marine veteran, Trevor Reed, in another swap with Russia in April. 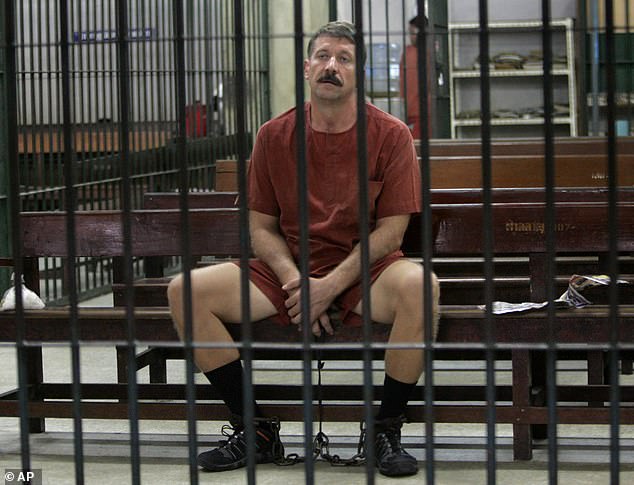 Bout is pictured in prison in Bangkok, Thailand in 2009 after being arrested in a sting by US agents posing as a Colombian FARC agent. 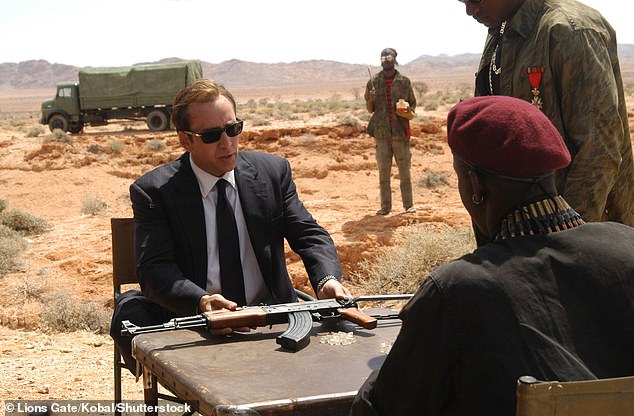 Bout, 55, is a former Soviet army translator who is serving his sentence in Illinois after being convicted of conspiring to kill Americans and illegally selling weapons to Colombia’s FARC, the Washington Post reported.

He was arrested by Thai authorities in 2011 following a sting operation, but his arrest and conviction have long worried Moscow.

‘Today one of the world’s most prominent arms dealers has been held accountable for his sordid past,’ former Attorney General Eric Holder said after Boot’s arrest in 2011.

According to the LA Times, a notorious list of his alleged clients included Muammar Gaddafi in Libya, Charles Taylor of Libya and firms close to him that helped arm the Taliban.

The diplomatic spat has all come with Russia’s brutal war in Ukraine as a backdrop, while officials still try to keep the lines open on issues ranging from military devolution to efforts to get grain out of Ukraine amid the war.

The administration has repeatedly questioned Russia’s credibility as a negotiating partner, even as it tries to secure the release of detained Americans.

Days earlier, a series of explosions rocked the Ukrainian port city of Odesa after Russia and Ukraine signed an agreement to allow grain shipments through the Black Sea.

Blinken later said it cast ‘serious doubt on the credibility of Russia’s commitment to yesterday’s agreement’ on grain shipments.